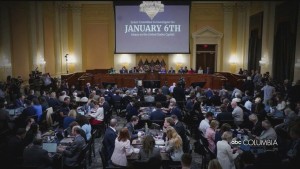 (ABC News) — Ginni Thomas, the wife of Supreme Court Justice Clarence Thomas, has agreed to voluntarily speak with the House Jan. 6 committee, according to her lawyer.

“I can confirm that Ginni Thomas has agreed to participate in a voluntary interview with the Committee,” her attorney Mark Paoletta said in a statement on Wednesday. “As she has said from the outset, Mrs. Thomas is eager to answer the Committee’s questions to clear up any misconceptions about her work relating to the 2020 election. She looks forward to that opportunity.”

CNN was first to report the news.

Chairman Bennie Thompson, D-Miss., told reporters in June that the committee would “soon” invite Ginni Thomas to speak with the panel.

“We think it’s time that we would, at some point, invite her to come talk to the committee,” Thompson said then, in the wake of revelations about emails that sources said she exchanged with right-wing lawyer John Eastman, a former clerk to Justice Thomas.

The committee is in possession of text messages between Ginni Thomas and President Donald Trump’s last chief of staff, Mark Meadows, in addition to the messages between her and Eastman. Emails have also been revealed of her communicating with officials in various states about efforts to overturn the 2020 presidential election.

The committee sent a letter to her requesting an interview in June.

Later that month, Thompson said a dialogue with Ginni Thomas was ongoing: “It’s our expectation that we will keep talking and trying to get her to come in.”

The committee has said Eastman was the mastermind behind the legal scheme to fraudulently overturn the 2020 presidential election, in part by pressuring then-Vice President Mike Pence to reject some states’ legitimate electoral votes on Jan. 6, 2021, when Congress met to certify the election results.

Ginni Thomas told The Daily Caller in June, “I can’t wait to clear up misconceptions. I look forward to talking to them [the committee].”

And Eastman wrote in a June blog post, defending himself: “At no time did I discuss with Mrs. Thomas or Justice Thomas any matters pending or likely to come before the Court.”