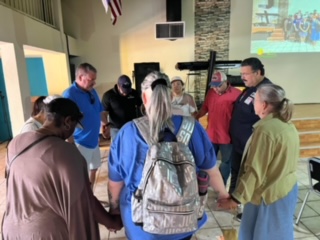 OKLAHOMA CITY (KFOR) – As the nation’s border crisis continues to escalate, many in the Christian faith, which often emphasizes caring for those in need, are grappling with how to respond.

“There’s probably no issue that’s been more polarized than immigration,” said Steven Eng. “We’re [just] reminding people of what the Bible has to say about these issues.”

Over several months, cameras across the country have captured the chaos of migrants coming to the U.S in droves in search of refuge or asylum but bussed to confusion, instead.


‘I was walking out of here no matter what,’ Woodward Senior walks out of hospital after suffering spinal cord injury at football practice

According to U.S. Customs and Border Protection, a large number of individuals fleeing to the U.S. and attempting to cross the border are coming from Venezuela, Nicaragua, and Cuba.

Oklahoman Brenda Kirk with the National Immigration Forum told KFOR she recently led a group of evangelicals to the border to see the crisis for themselves and to discuss the importance of advocating in local communities.

She also said according to scripture, the Christian response is clear.

“Immigrants are on the move all over the world,” said Kirk, who serves as a consultant and regional organizer to the National Immigration Forum.

“And the scriptures are very clear that we are responsible for caring for the vulnerable,” she added. “Oftentimes when you hear Scripture that references caring for the orphan and the widow, what’s often left out when people reference those scriptures is that it also includes the immigrant or the foreigner.”

Kirk took a group of Christian leaders to the border earlier this summer to experience the crisis first hand.

“We hear illegal immigrants [well] people who are seeking asylum are not illegal.,” Kirk continued.

“It’s the U.S. law that when somebody presents themselves seeking asylum, that’s that they have to seek it once they get here. They can’t apply for asylum outside of the country. They have to present themselves at the border and request asylum.”

Evangelical Christians gathering in Bethany Tuesday at Southwestern Christian University to discuss advocacy for migrants on the move said they were looking for common ground.

Steven Eng said he represents the policy work of the National Association of Evangelicals and mobilizes advocates nationwide and has partnered in ministry with the marginalized for 30 years as an ordained pastor with The Evangelical Covenant Church.

“[We’re] reminding people of what the Bible has to say about these issues [and] there is probably a lot more consensus than what we see in the media,” he continued.

“People who are immigrants are not liabilities or pawns for the political system, but are really gifts in and of themselves. [They’re] people and they’re created in God’s image,” he continued, also saying Tuesday night’s forum would address ways for Christians to use Biblically-based advocacy to help low-income families and workers, immigrants, refugees and other vulnerable populations.

But the Evangelical community is split on its perspective.

In an email Tuesday, local pastor and former candidate for Oklahoma governor Dan Fisher said “the U.S. is a nation of laws”:

“There is a legal process for entering the US.  Any entrance in violation to those laws is by definition – illegal.  We certainly care for the plight of others, but a country that does not maintain its borders is no country at all.  Every American citizen understands this principle.  That’s why we personally have locks on the doors to our homes, cars, etc.  If not, we would most likely be robbed blind.  The idea of wide-open borders is insane.”

“We need to have border laws that work well for for the safety of this country,” she said. “If you believe the Bible [is] direct from God, I don’t see how we could not have compassion.”