On latest N.H. visit, former Secretary of State Mike Pompeo says: ‘I am here; it is not random’ 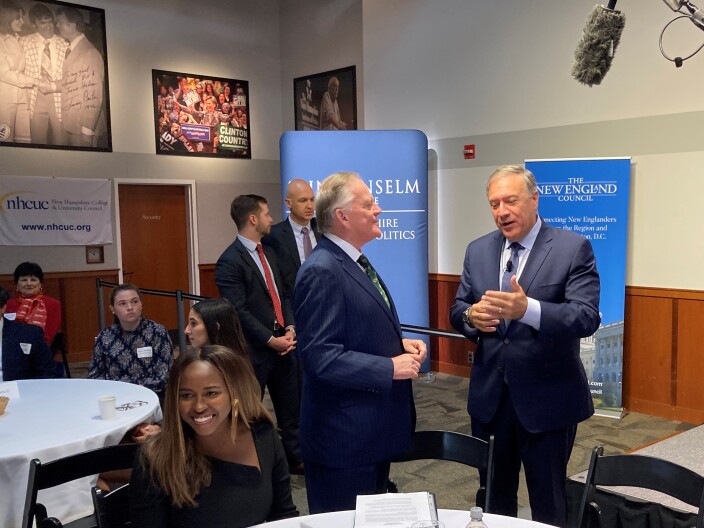 Former Secretary of State Mike Pompeo was back in New Hampshire on Tuesday, and taking aim at President Joe Biden as he weighs a 2024 presidential run.

In remarks at Saint Anselm College, Pompeo called the speech Biden gave earlier this month in Philadelphia one of the most divisive he could remember.

“He smeared half the country,” Pompeo said. “He called fellow Americans semi-fascists. He called us a threat to the soul and foundations of our republic.”

Pompeo described the tenor of his remarks at the college as “Pompeo unplugged,” but deployed teleprompters when he spoke as part of the New England Council’s Politics and Eggs.

Throughout, Pompeo cited what he sees as fundamental failings of the Biden administration, which Pompeo said will hurt the country more than the attacks of 9/11.

“Woke ideas, weak resolve, and waffling leadership always end up inflicting a cost that is more devastating to the cause than any plan hatched in Afghanistan,” Pompeo said.

“Our theory of the case for four years was that demonstrated deterrence and resolve will prevent conflict from happening. This is the model that we used for four years,” Pompeo said.

But Pompeo also stressed domestic issues, and when asked about threats to democracy, Pompeo said the greatest threat is what he considers improper teachings in public schools.

“If our kids are taught there is an oppressor class and an oppressed class,if they are taught our nation was founded on a racist idea, those ideas are corrosive to the highest degree and they lead to the absence of people valuing democracy,” he said.

Pompeo also several times invoked his own weight loss, reportedly 90 pounds since leaving the state department. “It was eggs that got me home,” he said at one point.

Pompeo stopped short of announcing a 2024 presidential bid, but noted he was doing what he needed to do.