Family members from across the state gathered in anticipation of seeing their loved ones. Erin Winters sat with her two sons anxiously awaiting her husband George’s return.

“I’m like butterflies nervous,” Winters said while waiting for George’s bus to arrive. 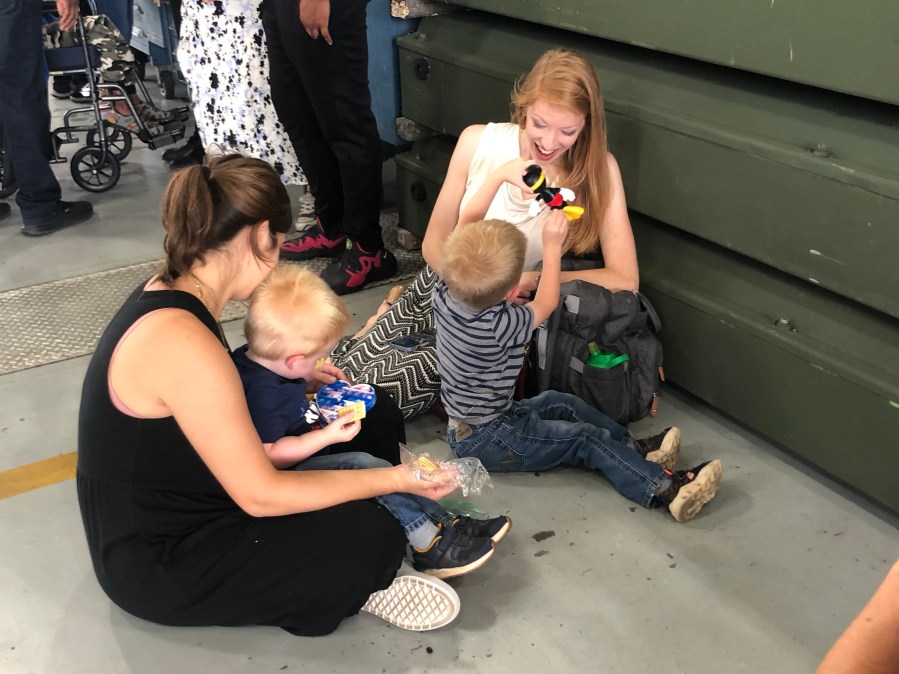 Erin Winters (right) waits with her sons and a friend for her husband’s bus to arrive in Sandston on Thursday. Photo courtesy of Sierra Krug.

Her son Gideon was just one year old when his father was deployed around Thanksgiving in 2021. Winters said the family managed to stay in contact as often as possible and learned to be creative in keeping George present in Virginia — even though he was physically in the Horn of Africa.

Winters said both of her sons Gideon and August are now ready to see their father in person, rather than through Facetime.

“He [Gideon] is old enough, he kind of gets it and gets really excited talking to daddy, and our oldest is really excited, so the 3-year-old is pumped.”

The moments leading up to the arrival of the National Guard bus were tense. Spouses, children and even pets scattered the field by the drop-off site. Meanwhile, servicemembers held similar feelings of excitement.

George Winters shared his thoughts with 8News about the moments leading up to reuniting with his wife and kids. He said that a delayed flight and seemingly endless travel represented the last obstacles that he and his fellow servicemembers faced before returning to their loved ones.

“The bus ride was probably the most agonizing,” Winters said. “The plane was — it was a mix of nervous and excited, happy.”

Cheers rang out across the Virginia National Guard Army Aviation Support Facility when the blue bus carrying the servicemen and women pulled up. Winters said he was nervous and excited when he saw his family waiting for him. His wife agreed that this was a moment they had been waiting almost a year for.

“To be such an incredible dad and also switch into Army mode so well, I’m so proud of him,” Erin Winters said. “It’s time for our family to be back together.”