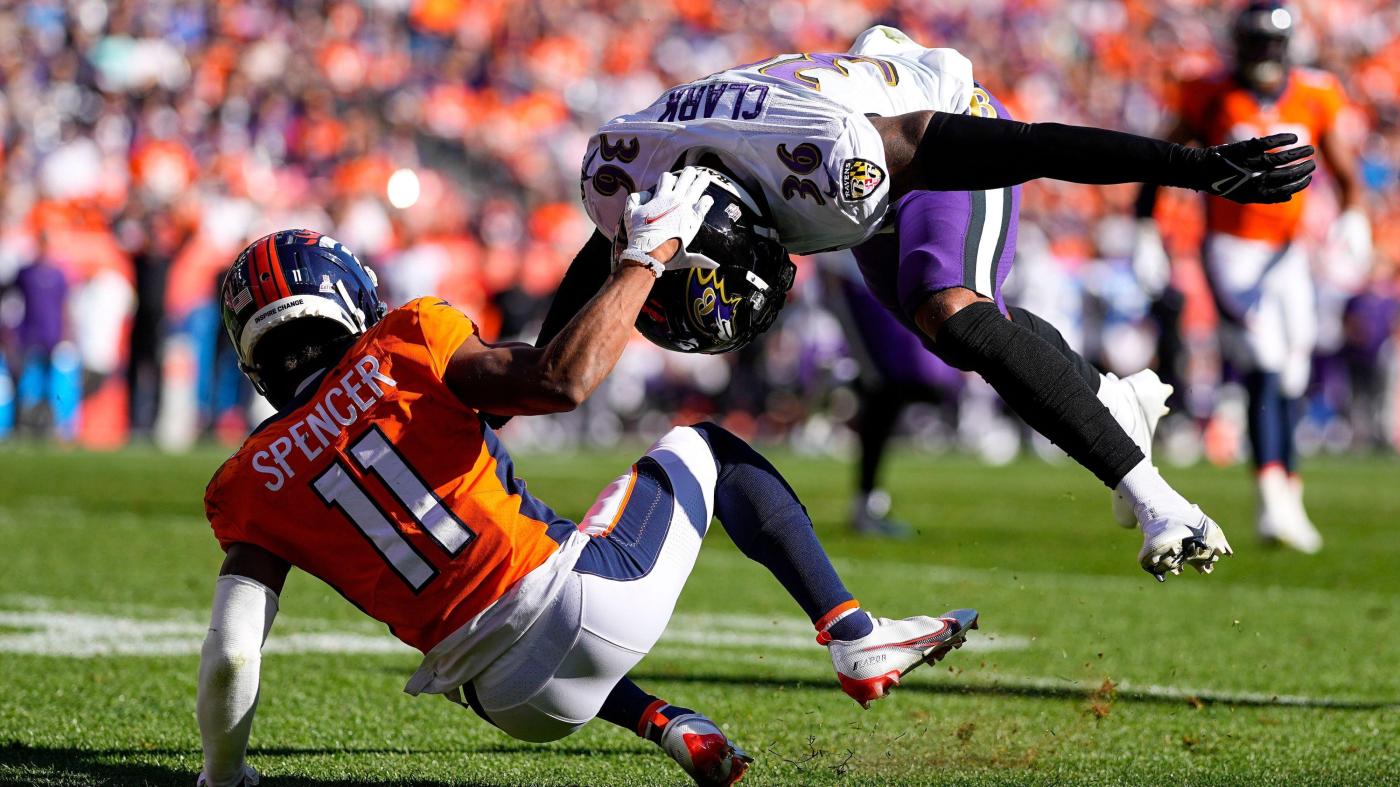 Here’s how The Baltimore Sun sports staff views the outcome of Sunday’s Week 13 game between the Ravens (7-4) and Denver Broncos (3-8) at M&T Bank Stadium:

Ravens 16, Broncos 10: Denver’s vaunted defense has fallen off since trading away Bradley Chubb. If the Ravens can run on the Broncos as well as Carolina did last week, this could be a blowout. Even if they can’t, Denver’s awful offense and special teams give the Ravens considerable margin for error.

Ravens 28, Broncos 14: The Broncos play well enough on defense to keep the game close, but their offense is so weak, even with Russell Wilson at quarterback. No one on their offense scares a defense, and the Ravens should grind them down in the second half if they stay with the run, which will get the play-action passing game going. If the Ravens lose to the Broncos, the fallout could be devastating.

Ravens 20, Broncos 10: The Ravens don’t want to contemplate where they’ll be if they lose to the drain-circling Broncos at home. Lamar Jackson probably won’t go off against a very good Denver pass defense, but it’s hard to imagine the Broncos scoring enough points to keep up with the Ravens’ still-reliable ground attack. Just don’t expect any of this one to be pretty.

Ravens 21, Broncos 10: I’m not expecting Lamar Jackson to put up great passing numbers against Denver’s defense. Sunday’s game will be dictated by the Ravens’ run game and having better execution in the red zone. Even though the Ravens’ defense fell apart late against the Jaguars, it’s hard to imagine Denver’s offense putting together a strong performance, especially with Russell Wilson playing so poorly.

Ravens 19, Broncos 16: Defense should rule the day, especially if these offenses continue to slump. Luckily for the Ravens, they have more talent across the board and the league’s best kicker in Justin Tucker. It’s likely the Ravens emerge from Sunday’s game with more questions than answers about their strange season, but it’s hard to envision a scenario where they lose to Denver given what we’ve seen from quarterback Russell Wilson and first-year coach Nathaniel Hackett.

Ravens 13, Broncos 10: The Broncos are a disaster right now — but their defense isn’t. It’s miraculous that quarterback Russell Wilson and his league-worst offense has been so bad that Denver has won only three games considering the defense has been so dominant. The Ravens will have a tough time scoring, even if Lamar Jackson finds his stride, but their defense should be in for a field day. For as often as you’ve heard the phrase “must-win” surrounding the Ravens the past two seasons, this is probably at the top of the list of games they must win. A loss would open the floodgates for criticism for everyone, top to bottom, inside the organization.