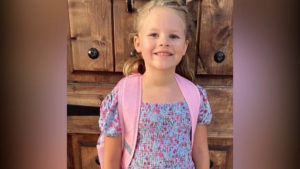 (CNN) — Several school districts across Texas are encouraging students to wear pink Monday in honor of Athena Strand, the 7-year-old girl who was allegedly kidnapped outside her home and killed last week.

More than 20 school districts, including Paradise Independent School District in the county where Strand was went missing, are participating in the act of remembrance, donning the color her mother said she loved.

Wise County Judge J.D. Clark also asked residents to wear pink on Monday in remembrance of Strand, saying in a Facebook post, “My heart is so heavy about Athena.”

Clark invited people to gather at the county courthouse Monday at 6:30 p.m. “to pray for Athena, her family, our first responders, and our community.”

Strand disappeared from the driveway of her home in Wise County, Texas, Wednesday, police said. After a county-wide search, her body was recovered Friday evening, according to Wise County Sheriff Lane Akin. Authorities believe she was killed within an hour of her alleged kidnapping, but her cause of death is still under investigation, Akin said Friday.

The suspect, identified by authorities as a contract driver for FedEx, is 31-year-old Tanner Lynn Horner, Akin said. He was allegedly making a delivery to Strand’s home when she disappeared, authorities said.

Horner is being held in Wise County jail on capital murder and aggravated kidnapping charges, according to its website. Bond was set at $1.5 million, Akin said. It was unclear whether Horner had an attorney Friday.

Tammy Natusch, whose granddaughter Serina Young attends elementary school in nearby Haslet, Texas, made a shirt that reads “Pink Out for Athena,” for her granddaughter to wear to school.

“This horrific act was less than 20 (minutes) from my house,” said Natusch.

Extra counselors will be available for students Monday at elementary and intermediate schools in the Paradise Independent School District, Superintendent Rod Townsend said in a statement on Facebook.

“We lost a precious member of our student body,” Townsend said in the statement. “Athena Strand was tragically lost this past week. This world will forever be different because she wasn’t allowed to grow and develop into the precious young lady she was meant to be.”

Strand’s mother, Maitlyn Presley Gandy, said in a Facebook post that her daughter was taken from her by “a sick, cruel monster for absolutely no reason.”

Gandy described her daughter as a loving big sister who dreamed of growing up to be a Viking princess with tattoos just like her dad’s. She was “innocent, beautiful, kind, intelligent, and just the brightest, happiest soul you could ever meet,” her mother wrote.

Authorities did not indicate a possible motive and said Horner did not know the family or the child, according to Akin.

In a statement to CNN last week, FedEx expressed its sympathies and directed further questions to law enforcement.

“Words cannot describe our shock and sorrow at the reports surrounding this tragic event. First and foremost, our thoughts are with the family during this most difficult time, and we continue to cooperate fully with the investigating authorities,” the statement reads.

The post School districts encourage students to wear pink in honor of Athena Strand after a FedEx driver was charged in her killing appeared first on East Idaho News.