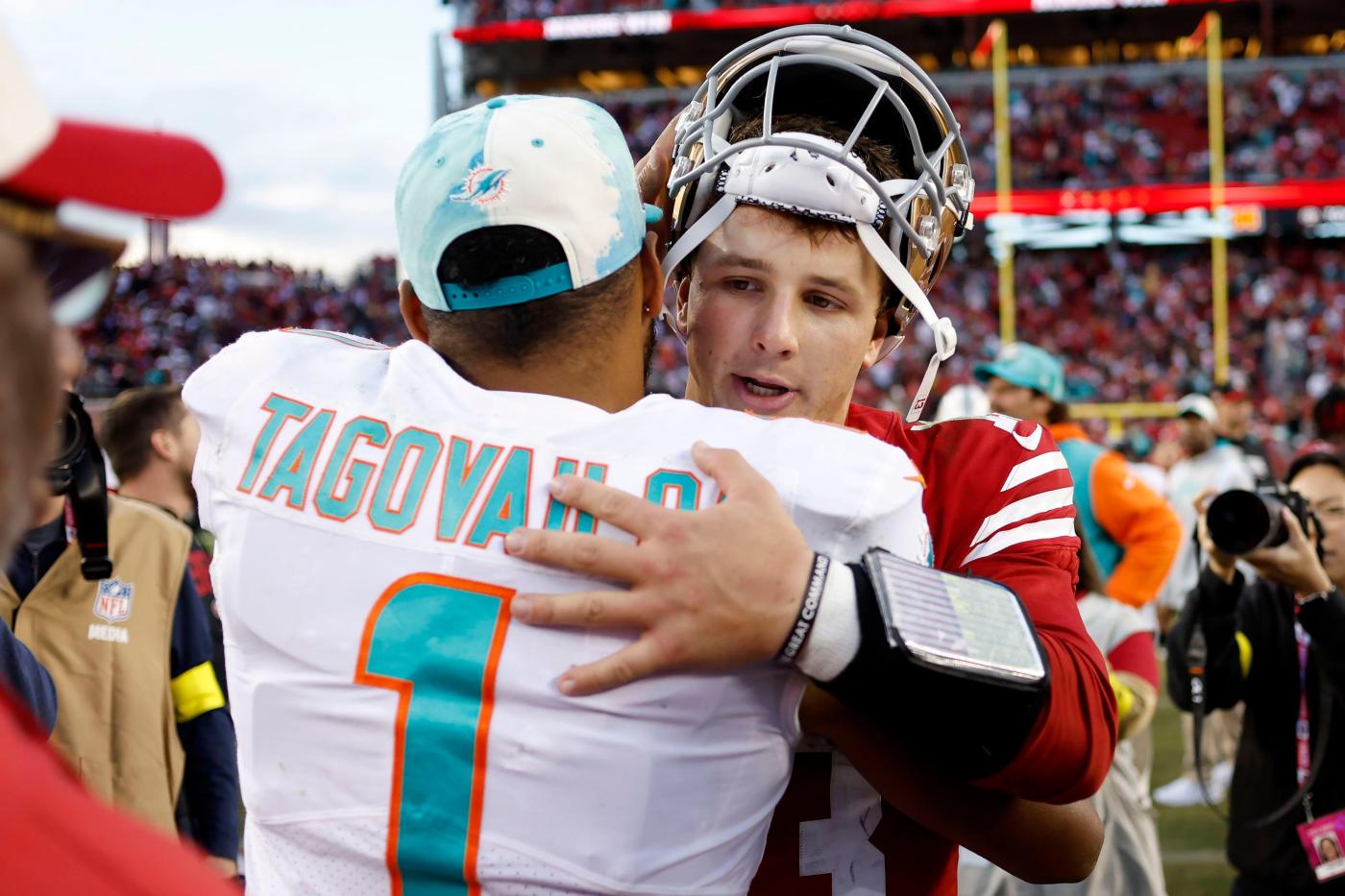 If this three-game road trip is a defining test, the Dolphins failed the first question.

Here are 10 thoughts on Sunday:

1. Player of the game: Brock Purdy. You could give it to San Francisco defensive end Nick Bosa with his three sacks, but Purdy was an unknown rookie thrust in a big game when San Francisco quarterback Jimmy Garoppolo was hurt. This is a statement about the way the Dolphins defense played. Who had heard of Purdy before Sunday? Maybe as Mr. Irrelevant as the last player drafted? But the third-string San Francisco quarterback and 262nd draft pick played well enough for the win. He wasn’t made uncomfortable at all by a Dolphins defense that gives up roughly twice the points on the road as at home. How it happened Sunday was simple: They couldn’t get Purdy’s offense off the field. He completed 25 of 37 passes for 210 yards, two TDs and an intercpetion. The 49ers offense had the ball 40 minutes and 34 seconds – and had 19 third-down attempts (converting eight). Meanwhile …

2. Tua Tagovailoa looked like 2021 Tua. This wasn’t the confident quarterback of much of this year. He missed open receivers. He looked uncomfortable in the pocket. You have to go back to the Tennessee game at the end of last year to see him off his game this much. He threw back-to-back interceptions and, if one happened when Jeff Harris slipped on a route, the other was a bad throw. It happens, especially against a top-rated defense. The Dolphins had beat up on bottom-third defenses in their five-game win streak – just as they beat up undermanned teams for much of their seven-game win streak last season. To win a big game like Sunday, they needed several things but better play at quarterback is the first one.

Bottom-line: The Dolphin game at Buffalo on Dec. 18 is taking on added importance in its hope for the AFC East title. It always seemed they needed that game. It’s become a must-win if they want the divsiion title, a possible bye and home-field playoff advantage.

4. Don’t say the absence of left tackle Terron Armstead can’t be overcome. When the Dolphins signed him last off-season, they had to plan who would move in for him when he got hurt. Armstead hasn’t played a full season in his 10-year career and played about half the game (18) the past two years. So if you’re going to sign such a health concern to big money, you’d better have a back-up plan. Beyond that, teams lose left tackles all the time. The Bills played an hurting back-up left tackle in their win against New England on Thursday. The Jets, Titans and Chargers lost star left tackles early this season. Armstead is an anchor of this line. The real problem Sunday was …

5. Nick Bosa is playing at a Defensive Player of the Year level. He had three sacks on Sunday and five quarterback hits Sunday. Two sacks were in the first half and the third forced a fumble that was run back for a 49er touchdown to make it the final, 33-17. The NFL, for all its nuances, is a game of matchups. Bosa worked against both Dolphins tackles, Brandon Shell and Greg Little. One sack, though, came when fullback Alec Ingold and then running back Raheem Mostert were the two blockers on him. That’s not a good scheme against a dominant pass rusher. Bosa now has 14.5 sacks to lead the league. As far as Sunday, teammate Azeez Al-Shaair “That’s just Bosa,” Al-Shaair said. “He changes the game all the time. He was hitting on all cylinders today.”

6. Big Brass Ones Award goes to Mike McDaniel. Fourth-and-one at the Dolphins 19. Ten minutes left. San Francisco up 23-17. And he goes for it? Full disclosure: This didn’t look like a smart call against the league’s No. 1 defense. But something more seemed at work here in the big picture. This was a coach making a statement to Tua Tagovailoa of trust more than anything else. Tagovailoa struggled for a large stretch this game and here was McDaniel doing what he has in other ways since arriving – confirming his full confidence in the quarterback. Tagovailoa completed a first-down pass to Hill to give the Dolphins some temporary hope in the day.

7. How does Tyreek Hill still get wi-i-ide open deep? He keeps playing like the most valauble player on this team. He had nine catches for 146 yards – or roughly half the receiving years (295). With Jaylen Waddle leaving the game, that made Hill’s game all the more important. It wasn’t just the numbers, either. Trailing 23-10, he caught a 14-yard pass for a first down, then the 45-yard touchdown in which he got so open behind the 49ers defense. On the fourth down play McDaniel called, Hill caught the first down pass. He’s been the Dolphins best player most every game and he was again Sunday.

8. Quote of the day: Deebo Samuel, asked about former teammate Rhaemm Mostert’s comments about the Dolphins having better talent, said “I thought they had the best talent … oh, my bad.”

* Zack Sieler keeps being an under-the-radar standout this season.

* Here comes Cincinnati. It beat Tennessee and Kansas City in successive weeks and might just be the best AFC team by the end of the month.

10. Dolphins at Chargers. The three-game road trip moves to Los Angeles – and the Chargers prove all teams on this stretch aren’t equal. Their defense entered Sunday ranked 28th in points allowed (26 a game). And their offense? Depends on their health. It ranks 13th but Justin Herbert has lost Pro Bowl left tackle Rashawn Slater for the year and was without the following players Sunday: center Corey Linsley (concussion protocol), right tackle Trey Pipkins III (knee), receivers Mike Williams (ankle) on Sunday against the Los Angeles Raiders. Keenan Allen played his fifth game of the year. Who plays next Sunday for both teams will go a ways toward figuring what might happen.