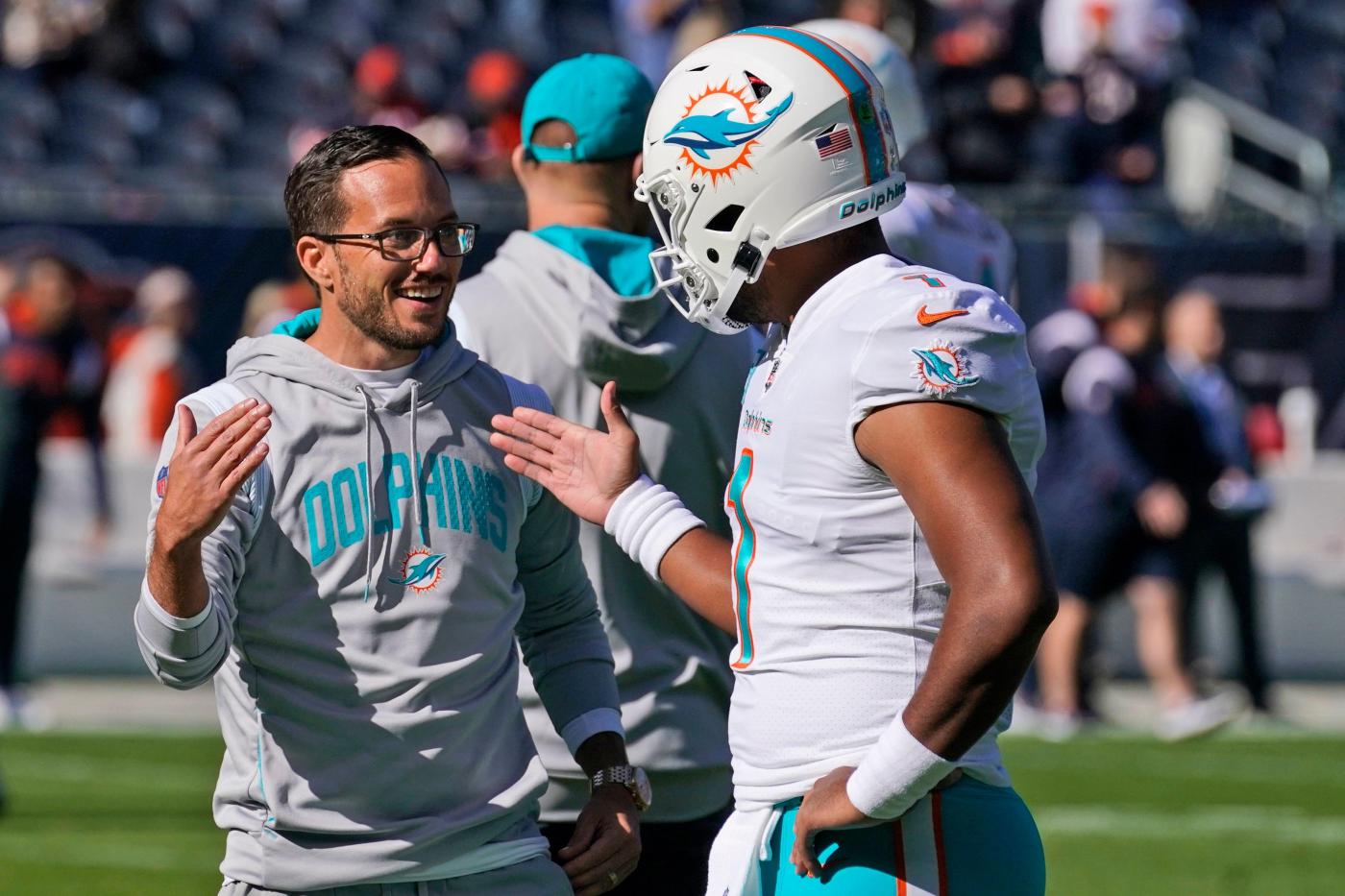 It’s not just any road trip for the Miami Dolphins as they prepare to take off toward the Bay Area ahead of Sunday’s showdown against the San Francisco 49ers.

With the team’s next game at the Los Angeles Chargers, the Dolphins are spending the upcoming week on the West Coast.

While the Dolphins, under coach Mike McDaniel, already appear to have one of the NFL’s most close-knit locker rooms, a week and a half in California will likely provide ample opportunities for extra team bonding as Miami (8-3) dips into this gauntlet of a final six-game stretch in their schedule.

“Without a shadow of a doubt. A huge, huge deal to me,” McDaniel said. “I’ve been fortunate enough to be a part of some teams, that how tight they were going into it pales in comparison to where they’re at after it.”

Spending the past five seasons with the 49ers, McDaniel had multiple chances to spend a week on the East Coast for back-to-back road games.

“You’ll always do more for your teammates than ultimately you’ll be able to muster up for just yourself. That kind of burns out,” McDaniel said. “But when you have that extra incentive, maybe you learn about someone’s past, learn about a sibling they have, find an interest. All of those things are what’s special about a team.

“The pillars of a team are always centered around relationships, and relationships grow when you invest in them. So, it’s a mandatory investment that you don’t really have anywhere to go. I’m very, very confident and certain and excited that this team with this character that cares as much about each other, it will be a wonderful opportunity.”

This two-game California swing marks the first time the Dolphins have consecutive games on the West Coast since 2016. That year, Miami beat the San Diego Chargers and Los Angeles Rams en route to its most recent playoff berth. The Dolphins also spent a week out west at the start of the 2017 season, when Hurricane Irma postponed their home opener against the Tampa Bay Buccaneers and caused them to open with their Week 2 game at the L.A. Chargers.

Quarterback Tua Tagovailoa wants to rally teammates together to hang out when they have free time in California.

“This is a great opportunity for our team to bond,” he said. “It’ll just be us, and I would say, as captains and with our leadership council group, we don’t think that it’s necessary that when we do get downtime away from football, guys stay in their room, or ‘Hey, I’m tired.’

“Like, ‘No, dude, you can sleep when it’s time for you to sleep.’ Let’s get guys to go out and let’s do things with our guys, whether that’s finding a basketball game to go to, trying to find a box, trying to go rent out a movie theater, trying to go watch a baseball game, whatever that may be, Top Golf. I don’t know. We’ll try to find some things that we can do that’ll help us get closer with our guys on this team.”

Said linebacker Jerome Baker: “It’s going to be a cool experience to bond with the guys. It’s really going to help because it’s going to be just us. You’re not going to have your family with you.”

Baker had hopes of checking out a Los Angeles Lakers game to watch NBA great and fellow Ohioan LeBron James play, but it turns out the Lakers are on a road trip during the Dolphins’ stay. The same goes for the other NBA team in the city, the L.A. Clippers, and the NHL’s L.A. Kings. If Dolphins players insist on visiting Crypto.com Arena, they can watch Disney on Ice between Dec. 8-11.

But at the end of the day, it’s still a business trip for the Dolphins, who need to continue to win ahead of their rematch with the Bills in two weeks to keep pace with Buffalo for the AFC East lead, after the Bills topped the New England Patriots on Thursday night.

“We’re just looking at it as two more games on the schedule against two really good opponents,” receiver Jaylen Waddle said. “It’s going to be kind of different, us staying out there for a week, but I think we have a team that’s good at adjusting. So it’s going to be a good challenge for us.”