According to a sworn affidavit by a member of the U.S. Secret Service — which in addition to protecting the President was initially founded to investigate counterfeiting and other financial crimes — at least five victims lost a total of over $10 million in cryptocurrency to scam websites promising to invest the erstwhile currency.

This graphic now appears on all of the sites seized by federal agents in their investigation into a multi-million dollar cryptocurrency scam.

“Pig butchering” is a social scam in which scammers message the victims through “dating apps, social media websites, or even random texts” pretending that they’ve reached a wrong number or misrecognized the victim. Then, they strike up a conversation with the victim over weeks or months, eventually becoming friends with them — hence the name of the scam, which refers to the practice of fattening a pig before slaughter.

Eventually, the scammer introduces the idea of an investment opportunity, offering to handle some of the victim’s money. As soon as the transfer is made, the scammer disappears, blocking the victim and deleting their profiles.

Taken for a Ride

In the affidavit, the secret service agent describes one victim from Washington state who lost a total of $9.6 million over four months.

Allegedly, the scammer contacted the victim through a messaging app, posing as a wrong number, then struck up a discussion of cryptocurrency trading, in which the victim was already interested and involved.

Eventually, the scammer pointed the victim towards the Singapore Monetary Exchange — a legitimate cryptocurrency trading platform — but offered a “spoofed” web address, made to resemble the legitimate site but controlled by the scammer. 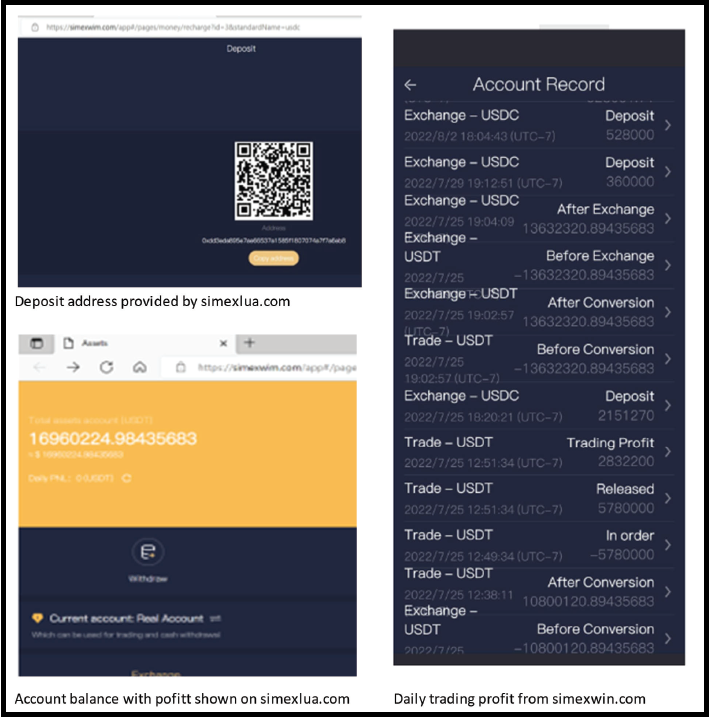 These screenshots show the “spoofed” cite that the victim believed to be an investment platform. (Photo from court records)

The victim’s investments — made in “U.S. Dollar Coin,” a cryptocurrency pegged to the U.S. dollar — were made from May to August of this year, according to prosecutors.

But while the victim believed she had made over $7 million in profit — an absurd rate of return of over 70% on a four-month investment — the small investment dividends she was being paid were likely merely her own money being recycled.

When she transferred that money, they told her she would have to pay 33 bitcoin because her account had “received 33 abnormal BTC” and they needed a security deposit “to ensure that you are not involved in any illegal behavior.” 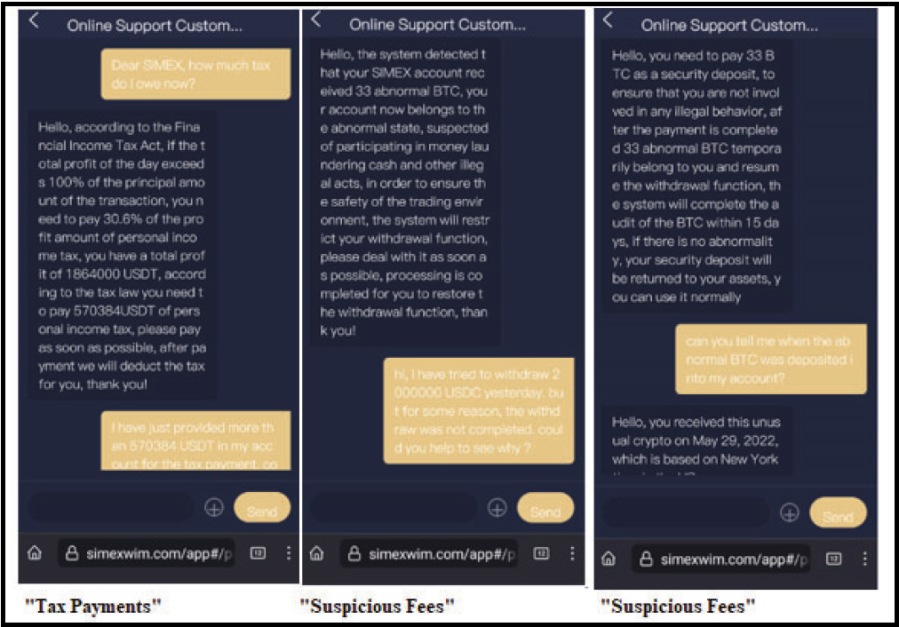 These texts show the continuation of the scam by “customer service representatives” who demanded steep fees. (Photo from court records)

This pattern allegedly continued until August before the victim realized she was being scammed and quit transferring them money.

Anyone who believes they’ve fallen victim to a cryptocurrency scam is urged to contact the Secret Service at CryptoFraud@SecretService.gov and file a report that includes “any purported investment websites visited, telephone numbers, email accounts, and social media profiles used by scammers, and any cryptocurrency addresses, transaction hashes, and dates of transactions.”

You can also file a report online here.